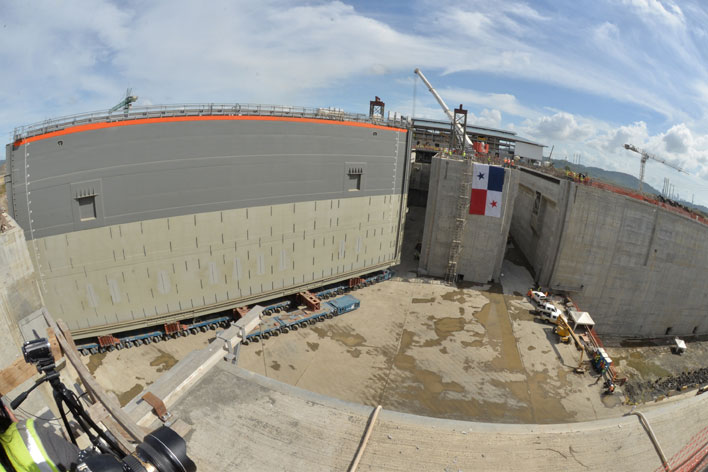 PANAMA CITY, Panama, January 19, 2015 – Carried to its final destination on self-propelled motorized wheel transporters (SPMTs) with more than 400 wheels each, the first gate for the new locks in the Pacific side was installed earlier today, marking another important milestone for the Panama Canal Expansion Program. Overall, the Canal expansion is currently 85 percent complete.

This gate, located in what is known as lock head one, is the first of eight gates that will be installed in the new locks at the Pacific side of the waterway. The steel rolling gate is 8 meters wide, 57.6 meters long and 22.28 meters in height, weighing 2,300 tons.

“Today’s installation marks an important step towards the completion of the Expansion Program,” said Panama Canal Administrator/CEO Jorge L. Quijano. “This project will have an important impact on world maritime trade and will further position Panama as the logistic hub for the Americas.”

The installation of the gates for the new locks began in December 2014 at the Atlantic side, where two gates have already been installed.

Upon completion, the two new lock complexes will have a total of 16 gates, eight in the Pacific and eight in the Atlantic.