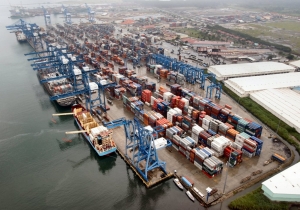 Operations at Manzanillo International Terminal (MIT), one of the largest container transshipment terminals in the region, have returned to normal after the strike that hit the port in November last year, when workers made claims over days off and the payment of overtime. After mediation between the company and the workers through the Labor Ministry, the strike ended after eleven days. Since there have been no further problems, MIT is catching up on the backlog and has almost reached the operating levels prior to the strike.

Recently was announced that MIT plans to invest more than $200 million in Colon over the coming years to expand port services it provides to shipping lines. The Future expansion of the Port includes dredging the access channel for maneuvers, areas for loading and storage facilities, new equipment for the yard and new equipment for container handling at port, building a new dock and three new piers for Post-Panamax ships that will begin transit the Panama Canal after its expansion.

Presently at MIT the movement of TEU’s has grown to 6.8 million TEUs.