The Panama Canal Plans to Charge a Greenhouse Gas Fee

The Panama Canal Plans to Charge a Greenhouse Gas Fee 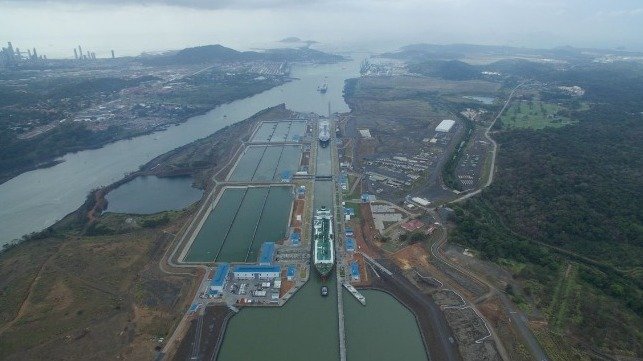 The Panama Canal Authority is set to become one of the first governmental entities in the world to charge shipowners a fee for their vessels’ greenhouse gas emissions.

Speaking at the AAPA Latino conference in Cartagena, Colombia, on November 30, Panama Canal Administrator Ricaurte Vásquez Morales announced that the authority is going to implement a new “Green Vessel Classification” system, which will include a new “Greenhouse Gas Emissions Fee.”

The Canal has long offered a “carrot” incentive for green shipping in the form of a points system, allowing cleaner vessels to progress up the canal’s customer rankings more quickly. However, the newly-announced fee appears to go one step further: a GHG charge would create a small financial penalty for the operators of higher-emitting vessels.

“The urgency to take climate action is here, and the industry must take an accelerated approach to mitigate the already adverse effects of climate change. By implementing this fee, the Canal acknowledges the environmental impacts of shipping, as well as those in the industry who are paving the way to minimizing emissions,” the authority said in an announcement. “The fee will support investments to guarantee environmental performance standards and aid in making Canal operations carbon neutral.”

Under the new scheme, the Canal will classify all ships over 125 feet in length using an energy efficiency ranking. It will incorporate three factors: the ship’s EEDI score; operational efficiency measures during transit, such as the use of bow thrusters; and the use of zero-carbon or carbon-neutral fuels. According to the authority, these factors could reduce emissions during a canal transit by 20-100 percent.

The fee amounts have not yet been announced, and the authority says that it is in talks with shipowners about how the new system would work in practice.

The Canal is making its own effort to cut carbon. It plans to buy 10 hybrid-powered tugs for a 20-percent emissions savings on towing operations; invest in a fleet of electric vehicles; and consolidate its facilities, which would produce a 33-percent savings.

The Panama Canal is itself uniquely vulnerable to climate change. Its operations are dependent on the water level in Gatun Lake, which also supplies the drinking water needs of the local population. The country has been hit by repeated droughts in recent years, and temperature rise has raised the rate of evaporation from the lake by about 10 percent. The U.S. Army Corps of Engineers has agreed to consult on new water-management infrastructure, and the Canal plans to spend up to $2 billion on this and other climate-adaptation projects.

In 2019, extreme drought conditions forced tough choices about draft restrictions on canal transits. The cycles of low rainfall are associated with El Niño events, which climate scientists expect to see more frequently in the future. “The impact of climate change is quite evident on the Panama Canal,” Vasquez said in 2020.

The government of Panama was one of the IMO member states supporting the International Chamber of Shipping’s proposal for a $2 per tone global bunker fee at IMO MEPC 77, which wrapped up last week. Though this measure was unsuccessful at MEPC, the canal will still be able to implement its own unique carbon fee for a large fraction of global shipping while it waits for IMO to discuss decarbonization.